DOES THE HEALTH AND SAFETY PROFESSION NEED MORE CRITICAL THINKERS?

Are there too many platitudes in health and safety? Does the profession need more critical thinkers? These were just some of the questions posed at a live podcasting recording, held recently at Safety and Health Expo. 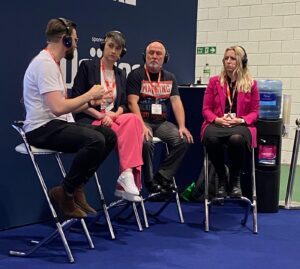 The host of the Rebranding Safety Podcast, James MacPherson, was joined onstage by the Head of Organisational Learning and Performance at K4 Consultancy, Elisa Lynch, the CBRE’s HSE Director Steph Camm and the Founder of Ouch Training, Simon Cassin for a lively discussion, which touched on a variety of subjects.

“They’re not easy questions, but hopefully they will challenge the way we think about our role,” MacPherson told the audience. First of all, he asked the panellists what kind of cognitive diversity – or different ways of thinking – does health and safety need?

In response, Cassin replied health and safety would benefit from “thinking better and understanding what knowledge is”.

Cassin added that he would like more health and safety professionals to look at issues from a philosophical perspective.

Camm quoted an example of a previous employer, which was in the construction sector and was looking to boost its health and safety team: “we were given that freedom to really think differently and we did employ somebody from the pharmaceutical industry, somebody from highways, and somebody from a construction background to add more knowledge in,” she told the audience. “The benefits were absolutely incredible, because you had people viewing things from different perspectives, and also different levels of risk tolerance, which I think is really important.”

The next topic for discussion among the panellists was “is safety narcissistic?”.

Camm said it is important to think about the number of times people say “safety” in the workplace, but added it was more “self-obsession” than “narcissism”.

Lynch added “there is definitely a level of arrogance” among some safety professionals who seek to impart knowledge in the workplace.

“We can’t really discuss whether we should use the word safety or not,” said Cassin. “Because we don’t really understand the relationship between words and ideas.”

MacPherson then introduced the next question, which was, “is safety as important as we think it is?” and asked if it would ever really be the first priority in an organisation.

“I’ve worked for quite a few businesses and not one of them had safety on the board, so clearly that business doesn’t see us as important,” he remarked.

Camm replied that you often hear “safety is our number one priority” in companies, but she also questioned what that really means for an organisation.

MacPherson then asked if safety in general has become too powered by platitudes and should it be more evidence-based. He quoted the example of high-visibility jackets, which have been the subject of high-profile safety campaigns, despite some research suggesting they do not work.

Cassin replied that a simplistic platitude “doesn’t work” because the underlying meaning is not attached to anything of substance.

MacPherson concluded by talking about the need for more critical thinking in safety and challenging the status quo.