Home HEALTH AND SAFETY £115,000 FINE AFTER HAND AMPUTATED BY MACHINE – HOW IT HAPPENED

On 10 February 2021, 59-year-old engineer Christopher Wright was working for Playford Packaging at its factory on Wrexham Industrial Estate in Wrexham when he was asked to look at a large case-making machine that had run into a problem. The operator of this fast-flowing machine, which can make 200 cardboard boxes a minute, had noticed that one of the conveyor belts had formed a loop and required an engineer to reset it. 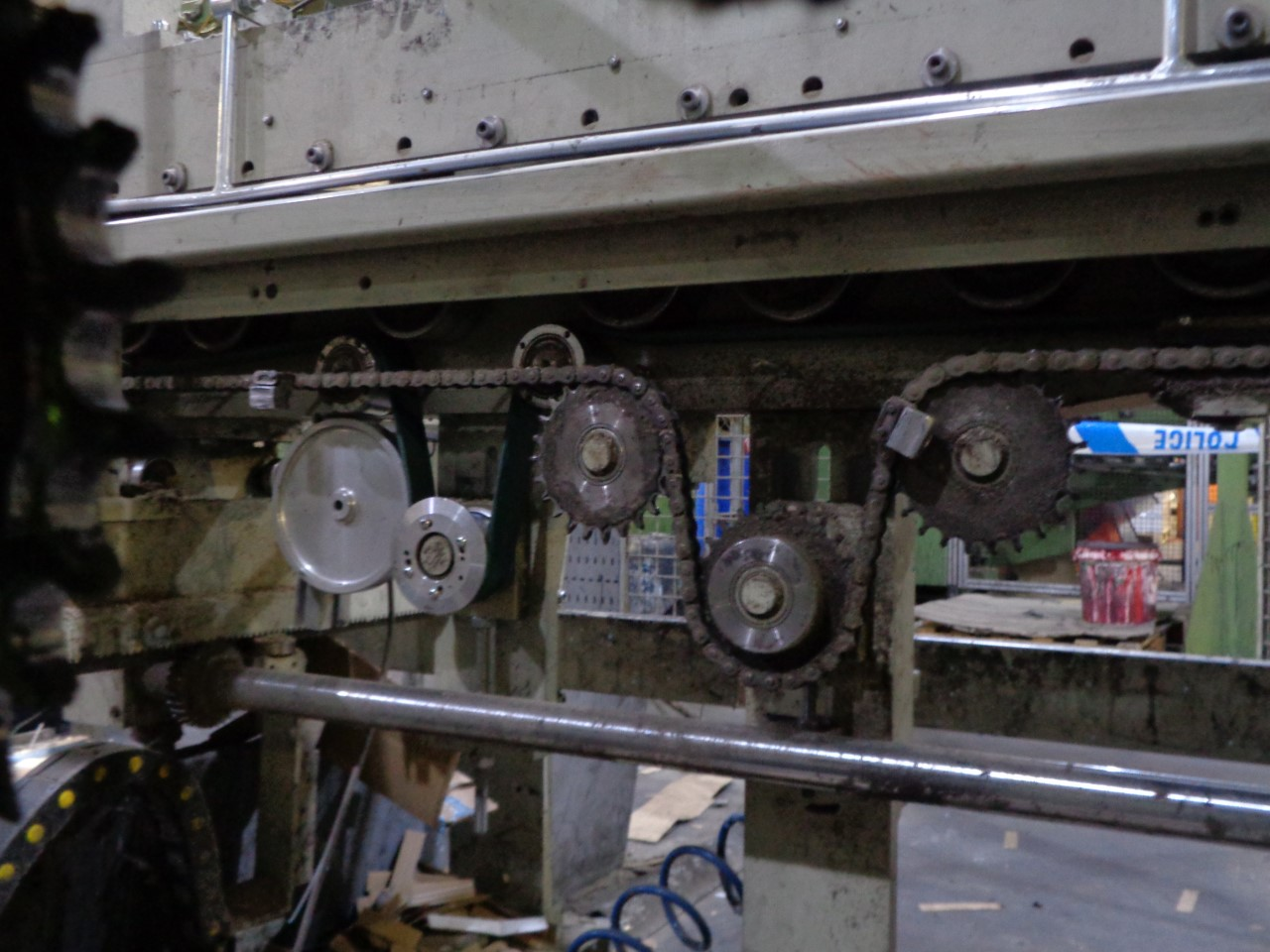 Christopher asked for the machine to be switched back on. Within seconds of the machine starting up, he felt a tugging on his arm. It’s thought the sleeve of his overalls became caught in a nearby exposed chain drive, which pulled Christopher’s hand into the chain mechanism and amputated his left hand at the wrist. His colleague pulled him out from under the machine and the Welsh Air Ambulance took him to hospital in Stoke. From there he was transferred to Royal Derby Hospital’s Pulvertaft Hand Centre, where surgeons re-attached his hand during an 11-hour operation.

However, more than 18 months later, Christopher still has very limited movement in his hand and he can no longer drive or do many of the things he previously enjoyed. He still suffers significant pain in the area of the amputation.

We spoke to HSE Inspector Sarah Baldwin-Jones about how this life-changing injury occurred.

‘At the HSE, we were notified on the day of the incident by Playford Packaging and by the police. That all came through directly to me and I went out to start my investigation on the afternoon of the incident,’ Sarah said.

‘There’s a mix of emotions when you receive a call like this because you are always worried about the outcome for the person involved. Even if it’s reported as an amputation, I have seen amputations that have resulted in fatalities, sometimes a few days afterwards. So the first thing that goes through my mind are thoughts about the injured person, what they have suffered and what their outcome might be.

‘The second thing is, what have I got to start thinking about in terms of the evidence that am I looking for? What things do I want the company to produce for me that might give me some level of assurance that they have done as much as they reasonably could to prevent this from occurring? Some incidents happen for unknown reasons but some incidents happen because companies take shortcuts.

‘As an HSE inspector, we have to be focused and think about where we’re going with this – who do I need to speak to and, sometimes, who do I not want to speak to right now? We have to be mindful that this might be – as it was – a prosecution, and therefore we don’t want to be talking to the managing director too much at this stage, because I have to consider his rights later on if I go on to prosecute his company.

‘We also have to think about what information the injured person’s family has had, because that can be distressing as well. Sometimes they are very much in the dark. In this case, I spoke to Christopher’s wife fairly quickly – I think on the following day. Christopher was very heavily sedated at the time, he wasn’t able to give his wife the information she wanted, all she knew was that he had had his hand amputated. So we are often the initial go-between for the family and the company in terms of what has happened.”

‘From my initial enquiries, it was abundantly clear that there were several identifiable breaches of legislation. The risk assessment was given to me but unfortunately it wasn’t suitable or sufficient because it didn’t consider any repair or maintenance to the machine. There was no safe system of work for either operation or repair and maintenance of the machine by the engineers.

‘I also left a notice to leave the machine undisturbed, which meant that the machine was down for approximately two days. To be fair to the company, because they had the perimeter guarding and they had the locked gates, the real issue here was the culture that had developed where people thought it was OK to go beyond that guarding. The key thing was that the company confirmed to all of their employees that that practice was not safe, and they had to ensure that it did not happen again.

‘So, it was more of a cultural thing in respect of the machine, and we ordered the company to leave the machine undisturbed until they had taken that action with their employees. That went right up to the managing director himself because he had been seen within this perimeter guarding along with other senior managers. So there was a significant cultural issue there.’

On 14 September and Llandudno Magistrates’ Court, Riftward Limited, trading as Playford Packaging, pleaded guilty to breaching section 2(1) of the Health and Safety at Work Act. The company was fined £115,000 and ordered to pay costs of £5,308.

Sarah’s investigation discovered that the company’s risk assessment was neither suitable nor sufficient as it had not considered the risks created from use of the machine, including during maintenance activities. There was no safe system of work in place to ensure safe isolation and access for tasks such as maintenance.

It was also found that it was common practice to bypass the gate that kept people and the machine separated, and to stand within the fenced area whilst the machine was in operation, demonstrating a lack of adequate supervision. Employees hadn’t received any instruction for the safe isolation of the machine.

WHAT SHOULD HAVE HAPPENED?

‘One important element in this story is that what was happening was reactive maintenance. The operator noticed that the conveyor had come off. That was a well-known problem on this machine and part of the reason for that was because the company didn’t have a proactive maintenance plan, they only dealt with things on a reactive basis,’ said Sarah.

‘The problem is that the production process is always against the clock – employees are always time pressured to get things fixed because the machine is needed for production and there is a customer at the end who is waiting for their cardboard boxes. Again, when we’re looking at culture, that pressure on the engineers to get the machine up and running was quite significant.

WHEN YOU HAVE AN UNSAFE CULTURE OF PEOPLE GOING INTO MACHINERY TO DO UNSAFE TASKS, IT JUST BECOMES CONTAGIOUS

‘The second issue is that while the company had erected perimeter guarding with working interlocked gates, employees had realised that if they went within that perimeter guarding and closed the interlocking gates, they could ask for the machine to be restarted and they could work out what the operational problems were,’ Sarah said.

‘But they hadn’t considered that they were at risk – and that was an activity that had been completed by the senior managers as well as employees. As usually happens over time, this became custom and practice because new employees follow senior employees and it becomes routine, even though it was blatantly unsafe because there was a variety of exposed chain and belt drives within that machine where the outcome would be either severe crushing injuries or amputation.

‘So, they should have prohibited employees at any level from entering the working area of the machine – that’s key. Had they done that, had they brought that up in the toolbox talk, it would have highlighted the danger to everybody else. But once a culture like that is established in a company, it’s then very difficult to stop it and say that it is wrong.’

WHAT CAN IOSH MEMBERS LEARN FROM THIS CASE?

‘I think there are two messages here. The pervasive culture is one. When you have an unsafe culture of people going into machinery to do unsafe tasks, it just becomes contagious. Unless you control that within the organisation, you will find that new employees will just follow custom and practice. And then we end up with this scenario where somebody gets caught out,’ Sarah said.

‘Secondly, there was the failure to appreciate that planned preventative maintenance can affect the reactive basis on which engineers are required to go in and routinely repair machines. That takes away the time pressure element, and it gives them the chance to think about what it is that they need to do and the risks that they might be exposed to. In this case, they could have come out of the machine, they could have been safely behind the guarding, and then restarted the machine and watched the conveyor from that safe position.

‘They didn’t do that because they were trying to shortcut getting in and out of the machine because of time constraints. Those time constraints are a false economy because it ended up with a really nasty accident and this machine was down for two clear days, which meant that all of the production had to stop, putting the company under further time constraints.

‘If they had just spent an hour maintaining this machine prior to this type of incident, it might not have ever happened and Christopher’s life wouldn’t have been so terribly altered.’